Its that time of year again…we are looking forward to the upcoming baseball season!
On Thursday, Feb 4th we will be holding our Annual General Meeting, 7:00pm at 31 Oldham Road. We really hope that many of you will come out and join the conversation about the future of your league. We need all the ideas we can get and have some exciting updates to share with you!

Remember, this is your league and we want your input to make playing baseball in the OWBL the best experience possible for all of our players and coaches!
Please pass this along to your teams, teammates and any others who may be interested in coming out on the 4th (there will be pizza).

This past week the OWBL had four players represent the league at the Senior Women’s National Tournament in Saguenay, Québec (August 13-17th).

Royal York players Stephanie Iwasa and Valerie Bowering and Annette players Elizabeth Benn and Kylie O’Donnell played on Team Ontario 2. It was a great weekend of baseball that lead Team Ontario 2 to qualify for the Bronze medal game against Québec 1. Benn kept the team in the game for the first four innings before Québec 1 overpowered Ontario 2 to win the bronze medal.

Team Ontario 1 won the gold medal game against BC to claim the championship title.

Congratulations girls! We’re so proud of you!

The Toronto Fusion travelled to Baltimore this past Memorial Day Weekend to play in the 2015 Baltimore Diamond Classic.

Fusion had a rough start to the tournament on Day 1 losing both of their games against NE Red Sox and the East Coast Yankees. On Day 2, the Fusion started the day off on a high with a come from behind victory against the Great Lakes. However, the Fusion lost their final game of the tournament.

Overall, the Fusion played competitive baseball with good team spirit and excellent sportsmanship against all of the teams. No other team has the level of fun that they do both on and off the field.

Good luck Fusion on the rest of your season!

The Toronto Fusion is hosting a baseball clinic for girls on Saturday April 25th at Queensway Park. Email s.harper@hotmail.com to register today!

On Tuesday February 17, the OWBL held their annual general meeting. We’d like to welcome the newly inducted 2015 OWBL executive. Familiar faces were joined by a couple of new ones this year. Your 2015 executive consists of:

Currently, the following teams have committed to returning for the 2015 OWBL season: Annette (Coached by Gary O’Donnell, Paul McElcheran, Shirley O’Donnell), and the Royal York Cardinals (Coached by Greg Harper). We are looking to add a new team this year as well that is welcoming new players and coaches so if you are interested in either playing or coaching, this is great opportunity to get involved in women’s baseball. Please contact us for more information at info@ontariowomensbaseball.com

The OWBL will be hosting the 2015 Can-Am Challenge in Toronto, ON through July 4th to 6th. The 2015 tournament director has yet to be announced but we look forward to another great international tournament in Toronto! More news to follow on the Can-Am Challenge 2015 in the upcoming weeks.

The OWGL’s rep team, the Toronto Fusion, are looking forward to another good season coached once again by Greg Harper and Gary O’Donnell. The Fusion plans to participate in the 2015 Baltimore Diamond Classic in Baltimore, MD (May 22-25), the Can-Am Challenge 2015 in Toronto (July 4–6), and a third US tournament TBD. Open tryouts for the Toronto Fusion will be held in early spring. Be sure to check back for tryout details.

Overall it was a very successful evening and we are all looking forward to an exciting 2015 season. Good luck!

It’s 2015 so the OWBL is looking forward to this coming baseball season starting in May!

The OWBL is looking to add a new team to the league this year and are recruiting players. If you are interesting in joining the OWBL please contact info@ontariowomensbaseball.com

The Toronto Fusion headed down to Rockford, IL over Labor Day Weekend to play in the First Annual Peach Orchard Classic. It was a special weekend for the players as a portion of they’re games were played at the newly renovated Beyer Stadium, which was the home of the Original Rockford Peaches (best known from the movie A League of Their Own) from 1943 to 1954. 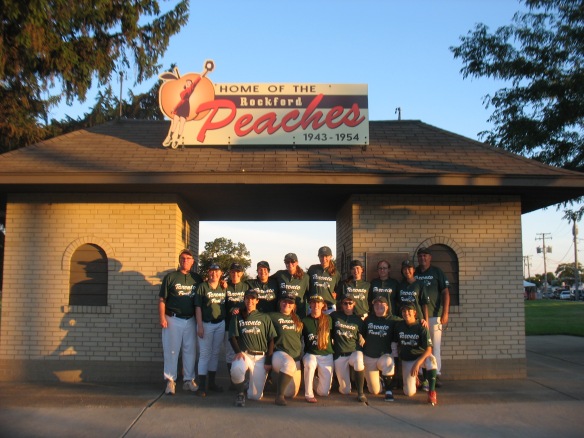 The Fusion had a 1-3 record at the tournament but played some great baseball and represented women’s baseball in Canada well. The win for the tournament goes to relief pitcher Andrea Tristao against the Chicago Gems, who also hit the walk-off single to score starting pitcher Bekki Zinger. Special mention goes to Kim McElcheran with the play of the tournament with her fake-out slide home, jumping over the Chicago catcher’s tag into a back-door slide. To experience this, and more action from the weekend, check out the video created by OWBL webmaster Kylie O’Donnell.

In addition to playing in the Peaches’ Original Stadium, Fusion players also had the opportunity to meet original members of the Rockford Peaches. These inspirational women gave out signed baseball cards and shared tales of their days on the field. It was an experience that many of the players will never forget!

Good luck Fusion in your 2015 Season!

For more information about game schedules and live updates of the weekend visit the tournament website. There will be live streaming of the games and you can catch you OWBL players in action!

Good luck girls! We’re so proud of you!

Congratulations to Annette for finishing 1st in the OWBL Standings for the 2014 season. It was an extremely tight race this year! Royal York and Annette both tied for number of games won and lost this season, however Annette came out on top in head to head match ups.

Annette and Royal York will face each other in a 3 games series over the course of September to determine the 2014 OWBL Champions! Games will take place on Thursday nights at Connorvale Park. Please check the OWBL Schedule for more information on game times.

Good luck to both teams!

Congratulations to the 2014 Can-Am Challenge Campions, the Individuals Team! 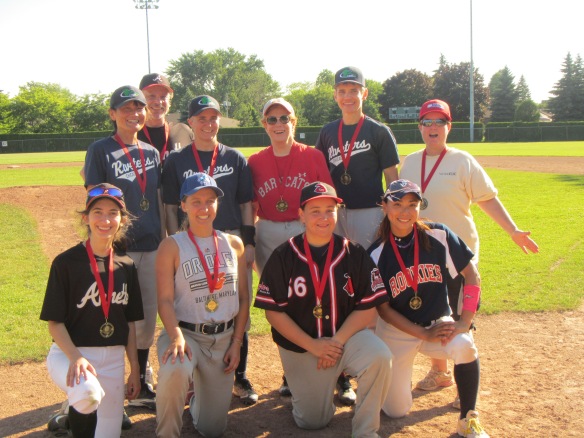 resulted in the Individuals on top with the DC Thunder as the runners up.

The round robin play was followed by a tournament social where participants enjoyed some pizza and snacks followed by some friendly competition in the skills competition. Two members from each team participated in events including throwing for distance, throwing for accuracy (into a hockey net), hitting for distance and running for speed. The top two from each event won prizes generously donated to the tournament by Humber College. A raffel was also held this year where winners won fabulous prizes such as baseball backpacks, outfielders gloves, and sport sunglasses donated by Home Run Sports.

On Sunday July 6, players experienced the rare opportunity to play with one another when all tournament participants were drafter into two teams that played two exhibition games again one another. Everyone had a great time, played great baseball, and made the tournament directors proud to host such a wonderful weekend of baseball! 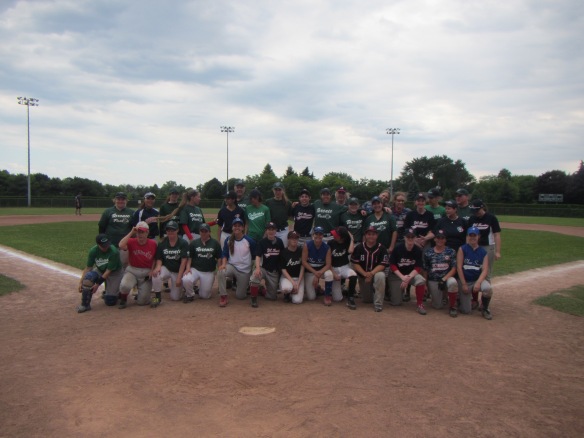 Check back for more information about the 2015 Can-Am Challenge!